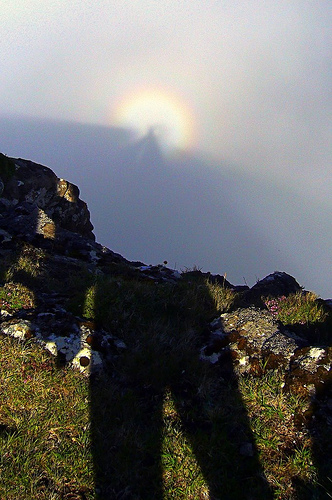 A Broken Spectre. by Heini Samuelsen.

A glory is an optical phenomenon produced by light reflected toward its source by a cloud of uniformly-sized water droplets. A glory can have multiple colored rings. The angular size is much smaller than a rainbow, about 5° to 20°, depending on the size of the droplets. Since it is seen in the direction opposite the sun it is most commonly observed while airborne, with the glory surrounding the airplane’s shadow on clouds.

A historical name for this phenomena is the Brocken Spectre or Brocken bow. The name derives from the Brocken, the tallest peak of the Harz mountain range in Germany. Because the peak is above the cloud level, and the area is frequently misty, the condition of a shadow cast onto a cloud layer is relatively favored. The appearance of giant shadows that seemed to move by themselves due to the movement of the cloud layer (this movement is another part of the definition of the Brocken Spectre), and which were surrounded by optical glory halos, may have contributed to the reputation the Harz mountains hold as a refuge for witches and evil spirits. In Goethe’s Faust, the Brocken is called the Blocksberg and is the site of the Witches’ Sabbath on Walpurgis Night.

C. T. R. Wilson saw a glory while working as a temporary observer at the Ben Nevis weather station. Inspired by the impressive sight, he decided to build a device for creating clouds in the laboratory, so that he could make a synthetic, small-scale glory. His work led directly to the cloud chamber, a device for detecting ionizing radiation.

This article is licensed under the GNU Free Documentation License.
It uses material from the Wikipedia article “Glory (optical phenomenon)“.