Joannes Faustus (portrait). 17th century German portrait of Faustus. Artist Unknown.
Although often displayed as a portrait of Johann Georg Faust, this is likely a portrait of Johann Fust, a printer from roughly the same area who (a generation of so earlier) was a business partner of Gutenberg. He is holding, not a grimoire, but a copy of their printed Vulgate Bible (Biblia Sacra Latina (1462)). Of course Gutenberg is now known for inventing mass production of books, but Fust (or Faustus) as salesman was charged with witchcraft in France for having more virtually identical Bibles in his possession than a man could produce in a lifetime. Once the nature of the invention was explained, he was released.

NOT Georg Faust. Although this has been identified as a portrait of the living Faust (www.bildarchivaustria.at), it is actually a portrait of the business partner of Gutenberg, Johann Fust, by Johann Leonhard Blanck.

There are similarities between the two men: They are from roughly the same area, and the same time period, and of course; their names are similar, as was their fame or notoriety.

Johann Fust was in France selling books off of the Gutenberg press for high prices and making lots of money while keeping the secret of their great invention (cheap books for the masses). No one could believe so many books could be produced, and he was arrested for witchcraft. In order to get the charges dropped, he had to reveal how it was done, and this is how the secret came out – and the price dropped.

Still, even if you had bought one of his new Bibles at the old manuscript prices, and kept it in good condition over the last 500 years, you could re-sell it for tens of millions of dollars. You can buy a single page today for only $100,000.

Portrait of Georg FaustThis is an impression seen in a chapbook of 1726, but is it any older than that?

The Revolution of 1525Peasants rebellion was most severe in areas including Erfurt, Wurttemberg, etc. These are areas closely associated with the real Faust (living approx. 1480 – 1540).“…the German Peasants’ War, the largest insurrection in European history before the French Revolution.”“Psychologically, the revolution was a major event in the early Protestant Reformation: it strengthened the convictions of some that religious abuses formed the main reasons for rebellion; it bolstered the arguments of others that the new doctrines had caused the revolution. “Pasted from <http://germanhistorydocs.ghi-dc.org/map.cfm?map_id=3667> See this same site for multiple interesting articles: (The Grievances of Rural Subjects – Kempten (Upper Swabia) (1492), Cannibalism at Breisach (1638) , The Terrible Year (1635) and the Peace of Prague ) for descriptions of life.Map: 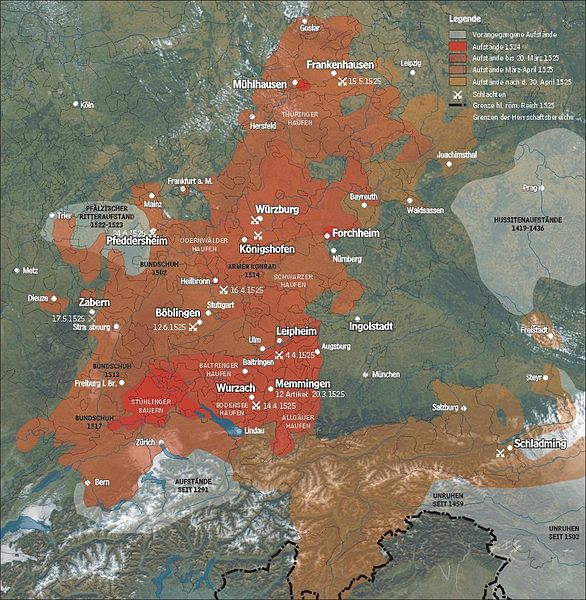 The “Real Faust”“It is now clear to us that the real Dr. Faust, on whom Marlowe based his play, was not a magician at all but rather an incredible braggart and trickster. His stories were bred in the German inns of the sixteenth century, an environment described by E. M. Butler as a place where “jugglers, charlatans, and quacks of all kinds thrived. . ., the ideal breeding ground for those crass deceptions and knavish tricks associated with the real Faust” (121). Dr. Faust was known to publicize himself as chief of all astrologers, the most learned chemist of all times, a palmist, a crystal gazer, and a man who could perform miracles greater than Christ (121). Unfortunately for Faust, he was never able to bring about any of these miracles (unless one wants to argue that such a man achieving a good theological degree is a miracle in itself). The only documented facts that might have given him credibility as a wizard, among his barmates, were things that now seem trivial. These include such occurences as his keeping a dog with him at meals (some of the sixteenth century general public considered demons to disguise themselves as dogs), his ability to occasionally obtain out-of-season game, and his threatening a group of monks with a poltergiest because they gave him bad wine. Whenever he would claim to bring someone back from the dead, he always needed a couple of days to prepare, no doubt to hire the right actors and create an eager audience. Dr. Faust was not made famous and immortalized in literature by such authors as Marlowe because of amazing acts, but rather because his amazing amount of bragging caused false stories to become exaggerated over time. In truth, the real Faust sounds more like Shakespeare’s comically boastful Falstaff than the respectable man unable to avoid temptation that Marlowe creates.Faust’s own legend did grow, however, to the point of his banishment from the city of Ingostadt for being a soothsayer. Faust brought this on himself though. Unlike the Faustus in Marlowe’s play, the real Faust went out of his way to inform people of his pact with the devil. Accordingto Johannes Weir, Faust once came up to him and said, “I surely thought that you were my brother-in-law and therefore I looked at your feet to see whether long, curved claws projected from them” (124). Faust had to know that such a statement would not be taken lightly by many in the sixteenth century, a time connected with great fear of Satan.”Pasted from <http://replay.waybackmachine.org/20070205123822/http://virtual.park.uga.edu/cdesmet/tiffany/faustus4.htm> [Compiled by: Jesse Baker, Adria Bredemann, Brittain Brussart, Adrian McLeer, Tiffany Tuck, & Tia Wolowicz for ENG 434, Dr. Desmet, University of Georgia, May 1997. The uga.edu page is gone, and the link is to the waybackmachine.org. All hail waybackmachine.]

If I, Martin Luther, had given him even my hand, he would have destroyed me. 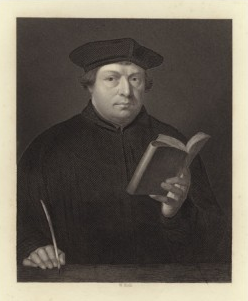 Martin Luther portrait by Hans Holbein the YoungerFROM THE TISCHREDEN OF MARTIN LUTHER. ‘Mention was made of magicians and the magic art, and how Satan blinded men. Much was said about Faust, who called the devil his brother-in-law, and the remark was made: “If I, Martin Luther, had given him even my hand, he would have destroyed me; but I would not have been afraid of him,—with God as my protector, I would have given him my hand in the name of the Lord.” ‘Sources of the Faust Tradition By Philip M. Palmer, Robert P. More, Robert T. Morebooks.google.com/books?id=89UA_SzzaEMC&lpg=PA93&pg=PA93#v=onepage&q&f=false