“Flying ointment, also known as witches’ flying ointment, green ointment, magic salve and lycanthropic ointment, is a hallucinogenic ointment said to be used by witches in the Early Modern period (first described by Alice Kyteler in 1324).”

[But did anybody really use this stuff? Or was is just fable? The ingredients sound plausible. We don’t suppose anybody thought they bodily flew to a witch’s sabbath (ie. returning with souvenirs) but entered into an intoxicated mental state, in which they communed, transformed, and visited. Perhaps we err in stressing the “flying” aspect?]

‘Decoctions of hallucinogenic plants such as henbane, belladonna, mandrake, datura, and other plants of the Solanaceae family were central to European witchcraft. All of these plants contain hallucinogenic alkaloids of the tropane family, including hyoscyamine, scopolamine, and atropine—the last of which is unusual in that it can be absorbed through the skin. These concoctions are described in the literature variously as brews, salves, ointments, philtres, oils, and unguents. Ointments were mainly applied by rubbing on the skin, especially in sensitive areas—underarms, the pubic region, the forehead, the mucous membranes of the vagina and anus, or on areas rubbed raw ahead of time. They were often first applied to a “vehicle” to be “ridden” (an object such as a broom, pitchfork, basket, or animal skin that was rubbed against sensitive skin). All of these concoctions were made and used for the purpose of giving the witch special abilities to commune with spirits, transform into animals (lycanthropy), gain love, harm enemies, experience euphoria and sexual pleasure, and—importantly—to “fly to the witches’ Sabbath”.’Pasted from <http://en.wikipedia.org/wiki/European_witchcraft#Hallucinogens_and_witchcraft> 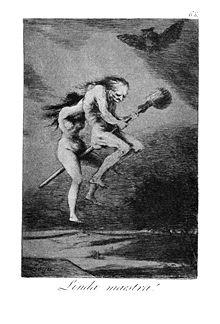 Figure: Witches flying to the Sabbath
Also from Wikipedia:

‘The ointment contains a fatty base and various herbal extracts, usually including solanaceous herbs that contain the alkaloids atropine, hyoscyamine and scopolamine. The herbs’ essential oils are extracted when heated in the base. These oils are poisonous when ingested; when applied to the skin, the alkaloids are absorbed more slowly into the body. Typical ingredients in alleged recipes include hemlock (Conium spp.), deadly nightshade (Atropa belladonna), wolfsbane (Aconitum spp.), and henbane (Hyoscyamus niger), usually in a base of animal fat.It was said that witches were able to fly to the Sabbath on their brooms with help of the ointment.”
[…]“The interaction between belladonna and poppy was made use of in the so-called “twilight sleep” that was provided for women during childbirth beginning in the Edwardian era. Twilight sleep was a mixture of scopolamine, a belladonna alkaloid, and morphine, a Papaver alkaloid, that was injected and which furnished a combination of painkilling and amnesia for a woman in labor. There is no definite indication of the proportions of solanaceous herbs vs. poppy used in flying ointments, and most historical recipes for flying ointment do not include poppy.’Pasted from <https://en.wikipedia.org/wiki/Flying_ointment>

“In the past, witches were believed to use a mixture of belladonna, opium poppy and other plants, typically poisonous (such as monkshood and poison hemlock), in flying ointment, which they applied to help them fly to gatherings with other witches. Carlo Ginzburg and others have argued that flying ointments were preparations meant to encourage hallucinatory dreaming; a possible explanation for the inclusion of belladonna and opium poppy in flying ointments concerns the known antagonism between tropane alkaloids of belladonna (to be specific, scopolamine) and opiate alkaloids in the opium poppy, Papaver somniferum (to be specific, morphine), which produces a dream-like waking state. This antagonism was known in folk medicine, discussed in eclectic (botanical) medicine formularies, and posited as the explanation of how flying ointments might have actually worked in contemporary writing on witchcraft. The antagonism between opiates and tropanes is the original basis of the twilight sleep that was provided to Queen Victoria to deaden pain as well as consciousness during childbirth, and that was later modified, and so isolated alkaloids were used instead of plant materials. The belladonna herb was also notable for its unpredictable effects from toxicity.”Pasted from <https://en.wikipedia.org/wiki/Atropa_belladonna>

[A sample of images relating to witchcraft and potions from the Wellcome Library. The Wellcome Library consists of a large collection of books, manuscripts and images, particularly concentrating on the medicine and the history of medicine. Many of the images are available for public use, and the Library has contributed a large number of images to Wikimedia Commons.

“The Library was founded on the collections of Henry Solomon Wellcome (1853-1936).

Born in Almond, Wisconsin, Wellcome became a pharmaceutical salesman and moved to London in 1878 at the encouragement of Silas Burroughs, with whom he entered into partnership to create the firm of Burroughs Wellcome. The business flourished, and Wellcome became sole owner after Burroughs’s death in 1895.

After the death of Burroughs, much of Wellcome’s energy was directed towards developing his collections. His main interest was focused on the history of medicine, including ancillary subjects such as alchemy, witchcraft, anthropology and ethnography.”

The online collection contains thousands of images of historical interest which you can browse to your heart’s content. Here, we provide a few images to whet your appetite:

“Ortus Sanitatis (English: The Garden of Health), also known as the Hortus, is the first natural history encyclopaedia, published by Jacob Meydenbach in Mainz, Germany on 23 June 1491. It describes species in the natural world along with their medicinal uses and modes of preparation. It is in part an extended Latin translation of the German Herbarius published in 1485 but, unlike that earlier work, also deals with animals, birds, fish and stones. The author does not restrict himself to dealing only with real creatures, but also includes accounts of mythical beasts such as the hydra, phoenix, harpy, dragon and zitiron.”Pasted from <http://en.wikipedia.org/wiki/Ortus_Sanitatis> 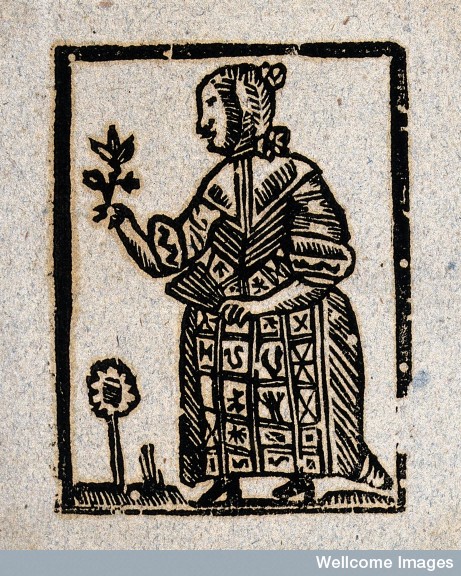 V0044812 Credit: Wellcome Library, London A witch, raising her arm above a cauldron, is making a potion; a young woman is kneeling in front of the cauldron; book and skeleton in the background.1773 By: John Hamilton Mortimer after: Dixon. Published: J. Boydell & J. Dixon,[London] (Kempes Row Chelsea) : 20 July 1773. Size: platemark 60.8 x 48.4 cm. Collection: Iconographic Collections Library reference no.: Iconographic Collection 576063i Full Bibliographic Record Link to Wellcome Library Catalogue Here’s a link to their witchcraft collection, from which many of the above images were taken:

[An excerpt from Faust by Johann Wolfgang von Goethe, in which we meet a witch, and Mephistopheles acquires a potion for Faust’s edification. Perhaps it will bring him youth and renewed vigour. Faust reveals his prejudice and contempt for an obvious charlatan. He is an educated man, superior. These tricks are beneath him. Faust is not a witch and the things of witches – like potions – are not to his taste. Would he consider an entheogen as a legitimate route to God? Like this potion, it would surely just bring him closer to the Devil.]

THE WITCH
Wherein, Sirs, can I be of use?

MEPHISTOPHELES
Give us a goblet of the well-known juice!
But, I must beg you, of the oldest brewage;
The years a double strength produce.

THE WITCH
With all my heart! Now, here’s a bottle,
Wherefrom, sometimes, I wet my throttle,
Which, also, not the slightest, stinks;
And willingly a glass I’ll fill him.
(Whispering)
Yet, if this man without due preparation drinks,
As well thou know’st, within an hour ’twill kill him.

MEPHISTOPHELES
He is a friend of mine, with whom it will agree,
And he deserves thy kitchen’s best potation:
Come, draw thy circle, speak thine adjuration,
And fill thy goblet full and free!

THE WITCH
(with fantastic gestures draws a circle and places mysterious
articles therein; meanwhile the glasses begin to ring, the
caldron to sound, and make a musical accompaniment.
Finally she brings a great book, and stations in the circle
the Apes, who are obliged to serve as reading-desk, and to
hold the torches. She then beckons FAUST to approach.)

FAUST ( to MEPHISTOPHELES)
Now, what shall come of this? the creatures antic,
The crazy stuff, the gestures frantic,–
All the repulsive cheats I view,–
Are known to me, and hated, too.

MEPHISTOPHELES
O, nonsense! That’s a thing for laughter;
Don’t be so terribly severe!
She juggles you as doctor now, that, after,
The beverage may work the proper cheer.
( He persuades FAUST to step into the circle .)

THE WITCH
( begins to declaim, with much emphasis, from the book )
See, thus it’s done!
Make ten of one,
And two let be,
Make even three,
And rich thou ‘It be.
Cast o’er the four!
From five and six
(The witch’s tricks)
Make seven and eight,
‘Tis finished straight!
And nine is one,
And ten is none.
This is the witch’s once-one’s-one!

FAUST
She talks like one who raves in fever.

MEPHISTOPHELES
Thou’lt hear much more before we leave her.
‘Tis all the same: the book I can repeat,
Such time I’ve squandered o’er the history:
A contradiction thus complete
Is always for the wise, no less than fools, a mystery.
The art is old and new, for verily
All ages have been taught the matter,–
By Three and One, and One and Three,
Error instead of Truth to scatter.
They prate and teach, and no one interferes;
All from the fellowship of fools are shrinking.
Man usually believes, if only words he hears,
That also with them goes material for thinking!

THE WITCH ( continues )
The lofty skill
Of Science, still
From all men deeply hidden!
Who takes no thought,
To him ’tis brought,
‘Tis given unsought, unbidden!

FAUST
What nonsense she declaims before us!
My head is nigh to split, I fear:
It seems to me as if I hear
A hundred thousand fools in chorus.

MEPHISTOPHELES
O Sibyl excellent, enough of adjuration!
But hither bring us thy potation,
And quickly fill the beaker to the brim!
This drink will bring my friend no injuries:
He is a man of manifold degrees,
And many draughts are known to him.
( The WITCH, with many ceremonies, pours the drink into a
cup; as FAUST sets it to his lips, a light flame arises.)
Down with it quickly! Drain it off!
‘Twill warm thy heart with new desire:
Art with the Devil hand and glove,
And wilt thou be afraid of fire?